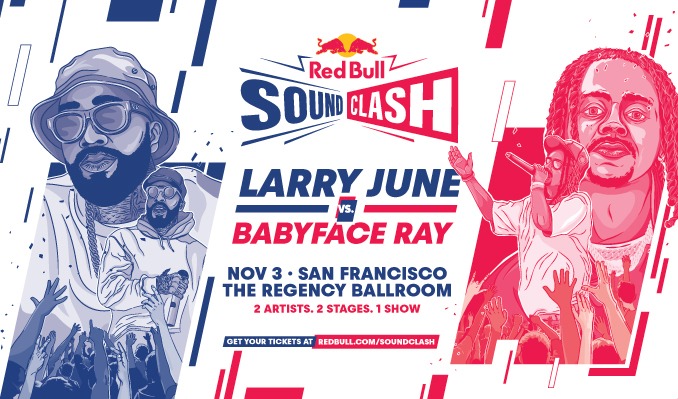 Red Bull SoundClash is a unique musical experience in the form of a once-in-a-lifetime live music experience where two artists push their artistic boundaries to compete across elaborate opposite stages, with the audience deciding the winner.

The distinctive live set-up, inspired by Jamaican sound clashes, brings together top talent across mainstream and underground music to create regionally relevant shows that honor the artists’ local communities and heritage. Since it was first held in the Netherlands in 2006, there have been 80+ Red Bull SoundClash events worldwide featuring renowned artists like Snoop Dogg, Ludacris, and Erykah Badu.

New for the 2022 series, Red Bull SoundClash will feature a dual-city showdown that celebrates the rich musical bond and distinctive flair of two U.S. cities and rap capitals – Detroit’s resurgent self-made scene and the Bay’s historic nonconformist sound. We’ll see Detroit’s Babyface Ray facing off with the Bay Area’s Larry June first in the Motor City on October 15th, and then again for an encore battle in The Golden City on November 3rd.

Read More
*Service and handling fees are added to the price of each ticket.